If like me, you are interested in how we might work with research methods that are creative and visual, this was THE workshop. So, why visual methods? Well, I’m thinking about qualitative participatory research that captures the lived experiences of participants in a way that is empowering, dialogic and as useful to them as it is to me. I might get this from more traditional methods as researchers have been doing for years. But there’s a power dynamic involved in this that doesn’t sit well with my own ontological position. I have attempted here, to summarise what stood out for me on that day. 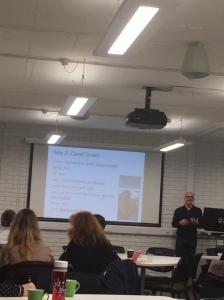 Dr Ali Roy from UCLAN began the workshop by talking us through his work using walking tour interviews with sex workers in Manchester. These were later transcribed with timings and a ‘walking map’ of the route taken. Now this is a method I’m wanting to use myself so hearing about the complexities involved was useful. Ali talked about how the mobile nature of walking interviews, shifts power relations and also changes what we hear. It also affirmed a way of initiating free-flowing responses triggered by landmarks or places although unlikely to present as a linear narrative. Ali outlined what he’d realised through initial participant observation; that participants struggle with being face-to-face. Whilst walking allows participants to lead and for the researcher to witness their everyday practices, it becomes their narrative and gives precedence to their agenda.

Dr Geraldine Brown from Coventry University shared her delivery and evaluation of a ‘Master Gardener Programme’ in a prison setting. Consequently, this shared physical space, affected how offenders and officers understood the environment of the prison; the kind of atmosphere that was more conducive to forming positive relationships and a gradual shift of mindset to accommodate this. I especially liked Geraldine’s introduction of herself as the researcher and an unapologetic acknowledgement of her own positionality; a reminder that identity is highly political. Beyond this however, delivering to the quantitative ‘output’ demands of the commissioning body may conflict with a researcher’s personal positioning. Output and outcome orientated demands can overlook some of the hard work that has taken place; building trust, relationships and the conversations that have taken place. Geraldine also discussed the importance of co-constructing research methods and eliciting feedback from participants within constrained settings. The bigger reward was the empowering effect it had on the participants; the feeling of being purposeful and part of something bigger. The centralising of the offenders’ voices positioned them in the heart of the production of knowledge; an otherwise vulnerable and forgotten group had been humanised.

Professor Rachel Thomson reflected on a number of longitudinal studies that she had been involved in and framed time as a method. She also outlined one particular study which became ethnographic; a reminder that research – like many less trodden paths – isn’t always going to unfold as we might expect. In her most recent work about capturing ‘a day in the life of’ modern motherhood, Rachel positioned motherhood as work to elicit stories of the tacit and mundane. Here, there was a shift from narrative to practice which resulted in a range of creative outputs from photographs and multi-media animations to audio recordings to capture not just voice but the sounds of the environment.

Dr Nicola Ingram drew upon her personal experiences as an Art student in her intent to promote visual thinking and reflection through participant generated artefacts. Drawing upon art as a way of thinking, Nicola shared her experience of how visual approaches can give texture to participants’ lives and lived experiences. In contrast to interviews which might be limiting and disempowering, the act of creating self-portraits provided an insightful way of getting to know how people view and value themselves. There was a sense that the visual could get you to places you can’t get to with an interview, and the visual allows interpretation and open communication. Focusing on an artefact gives participants a safe distance: it’s less about them as individuals and can elicit more in-depth and reflective responses.

Dr Melissa Butcher’s participatory video research with young people was an interesting follow on to artefact-based inquiry. It echoed some of the complex territory involved with video that Nicola had referred to. This project involved working with young people in Hackney in response to urban redevelopment and intercultural relationships. The purpose of the video was to capture the sensory experience of young people; their responses and sensitivities to changes in public spaces. The choice of video as a medium was anchored on its place within popular culture and to privilege the voices of the ‘hard to reach’. The audience were then given an ethical dilemma to consider based on an actual situation that had arisen. What emerged from this activity was the difficult ethical decision making that goes on to ensure that democratic and just choices are made whilst working towards meeting the project objectives. I realised how political data is in terms of ownership and confidentiality. We might want to promote democratic power relations but not all participants are ready for this. 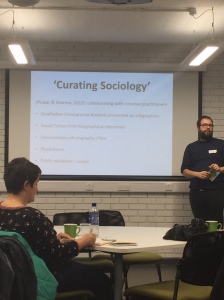 Daniel Silver’s ‘Alternative approaches to telling about society’ got me thinking more seriously about my own research. Dan was keen on communicating research in alternative ways, particularly for public spaces. There were some key ideas around what happens when information is made ‘accessible’ in terms of who it reaches. Dan argued the need for more imaginative ways of reporting and showed us some very beautiful examples of his own work; pamphlet, book, infographics, documentary, illustrations and public exhibition / event. He highlighted how being conscious about the politics of representation and through creative collaboration and dissemination, participants can feel more valued. Along with this, research can be communicated to a wider public, making evidence-informed social action more democratic.

Dr Katy Vigurs shared her personal journey of “serendipity and opportunity” drawing on the power of visual storytelling for wider engagement. Like Dan, Katy believed that research findings had to be more widely available. Commissioned to undertake study around student debt and graduate transitions, Katy explained how the students’ use of metaphors called for more visual representation. So, a group of final year undergraduate Media students were tasked with producing comic strips based on interview transcripts. Although they weren’t primarily involved with the ‘research’ this production of an artefact meant that they were also drawn into engaging with the subject matter; in turn raising awareness, and empowering engagement to project the narratives.

The final session, led by Professor Helen Lomax, Professor Janet Fink and Dr Dawn Mannay, centred on ethics and voice. There was an explicit intention to think critically about the visual and participation, acknowledging participatory research as a complex process involving deep-seated ethics and politics. Janet discussed the troubling voice of participatory research; how it worked, what it does and how limitations may be driven by external forces. An especially important question was whether specific methodologies evoked more authentic voices. We often think that somehow voice can reflect a participant’s actual experience, without realising that voice is, itself, a social construction. There was also a question of where we were allowing the voices to come through in terms of researchers’ dissemination practices. Just relying on the critique of voice research is simplistic. Drawing on how therapeutic culture has promoted talking and sharing, has perhaps ignored silence as an equally valid choice. There is a need to generate multiple layers of participants’ lives. 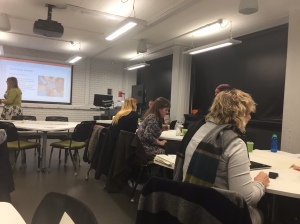 I was interested in the idea that choosing visual media to show attachment to places might be more significant than simply presenting statistical information about the place. However, bringing together a number of different pieces of data to make up the bigger study is more meaningful. Visuals without commentaries run the risk of being misconstrued; poverty, for example, doesn’t always ‘look’ as it should if we see well-dressed children, hence the need for socio-economic information.

To conclude, whilst visual methods and innovation might bring about their own complexities, my experience of this workshop was a positive one. For me, the day highlighted the following:

I am excited to have had a glimpse into some inspirational work that is part of a movement to be creative with the data and the multiple audiences it needs to reach. It might not be appropriate for some projects but for participatory research, it definitely feels well matched. What I especially valued was the openness and the honesty of the scrapes and struggles along the way; dilemmas about who owns the data; the realities of getting involved with ‘hard to reach’ or ‘invisible’ groups; and there is no one clear way to deal with the unexpected. I’ve had to think about how I might capture and retain the emotional impact of research whilst protecting identities of people and place. But there is a reassurance in the uncertainty. It evokes a greater commitment to reflect and accept our own vulnerabilities when veering off the path of ‘tried and tested’ methods.

Bally Kaur is a PhD researcher at Birmingham City University. Her research involves a community based ethnographic study of the educational trajectories of individuals. She is interested in capturing their experiences, taking into account how factors such as social class, ethnicity and physical locality and might have shaped these. There is also a need to explore the role played by third sector organisations, community groups and the marketization of education.

View all posts by bsapgforum

Tell us what you think... Cancel reply